This is the 3rd post of a series of blogpost on RWC2016. Find the notes from day 1 here.

I'm a bit washed out after three long days of talk. But I'm also sad that this comes to an end :( It was amazing seeing and meeting so many of these huge stars in cryptography. I definitely felt like I was part of something big. Dan Boneh seems like a genuine good guy and the organization was top notch (and the sandwiches amazing).

The morning was filled with talks on SGX, the new Intel technology that could allow for secure VMMs. I didn't really understood these talks as I didn't really know what was SGX. White papers, manual, blogposts and everything else is here.

If you know both attacks, don't expect anything new.

11:10am - On Deploying Property-Preserving Encryption

tl;dw: how it is to deploy SSE or PPE, and why it's not dead

I think the point is that there is nothing practical that is better than PPE, so rather than using non-encrypted DB... PPE will still hold. 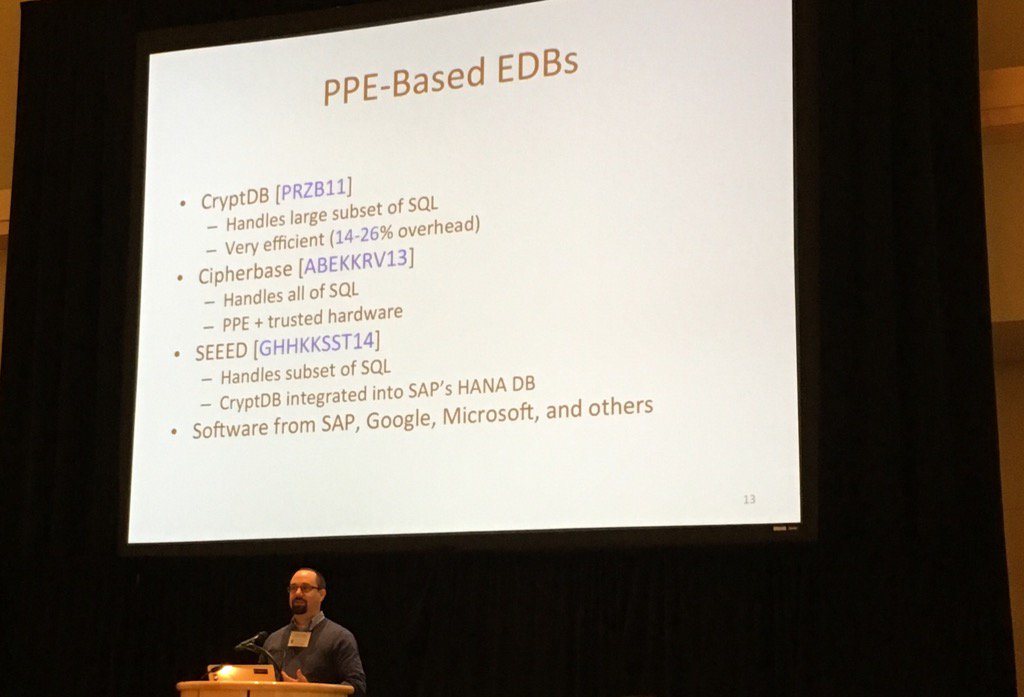 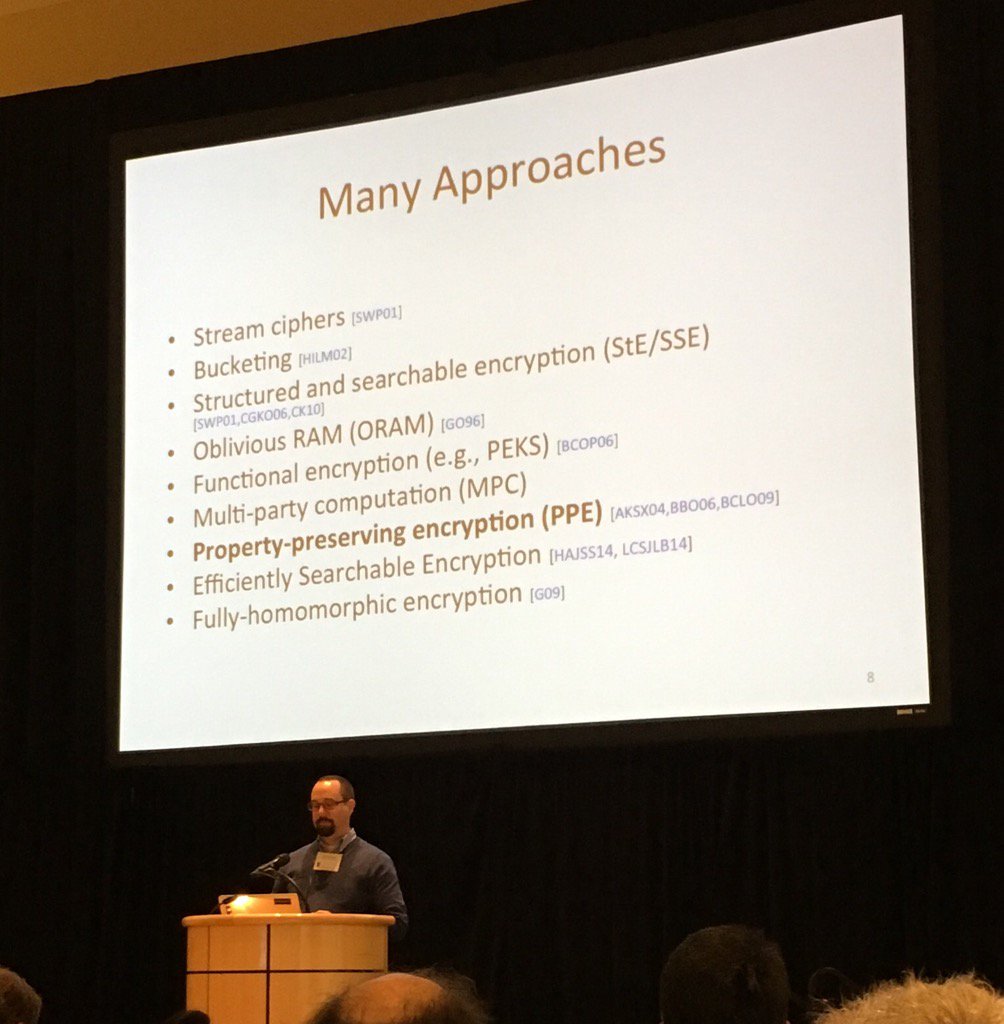 check page 6 of the paper for explanations on these attacks. All I was expecting from this talk was explanation of the improvements (Lp and cumulative) but they just flied through them (fortunately they seem to be pretty easy to understand in the paper). Other than that, nothing new that you can't read from their paper. 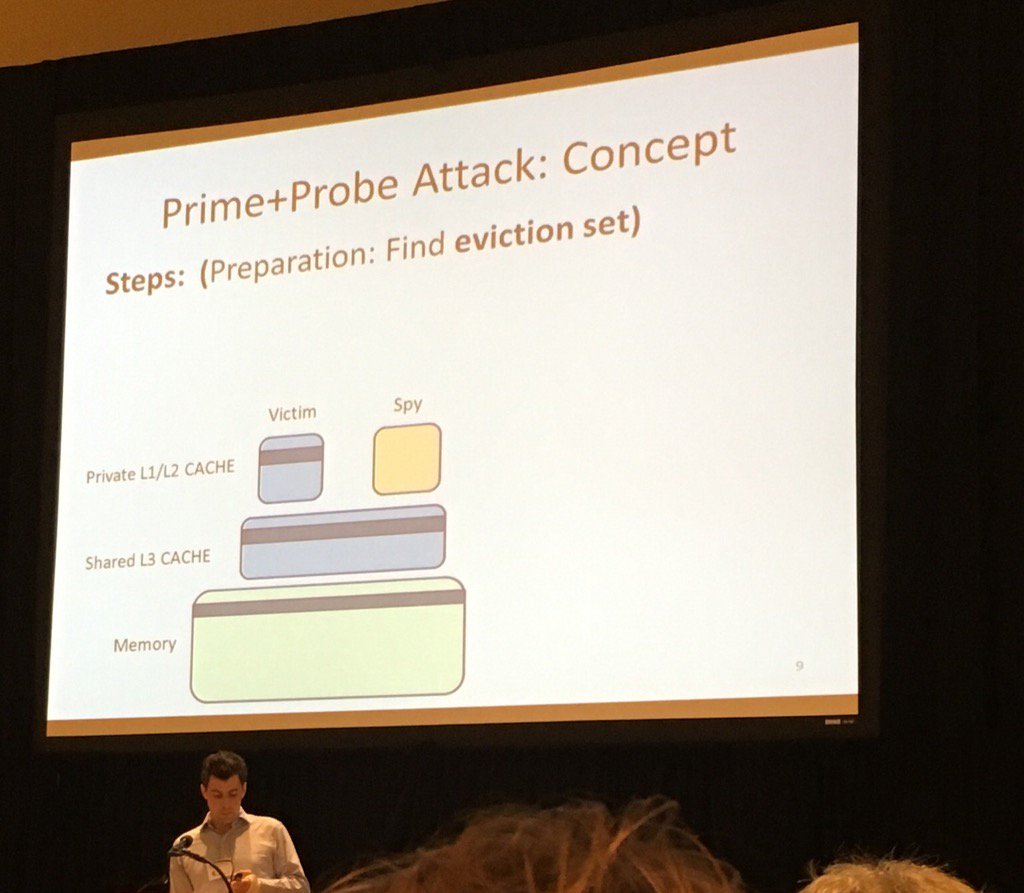 Why didn't they talk of flush+reload and others?

2:30am - Practicing Oblivious Access on Cloud Storage: the Gap, the Fallacy, and the New Way Forward

tl;dw: ORAM, does it work? Is it practical?

Didn't get much from this talk. I know this is "real world" crypto but a better intro on ORAM would have been nicer, also where does ORAM stands in all the solutions we already have (fortunately the previous talk had a slide on that already). Also, I only read about it in FHE papers/presentations, but there was no mention of FHE in this talk :( well... no mention of FHE at all in this convention. Such sadness.

An Oblivious RAM scheme is a trusted mechanism on a client, which helps an application or the user access the untrusted cloud storage. For each read or write operation the user wants to perform on her cloud-side data, the mechanism converts it into a sequence of operations executed by the storage server. The design of the ORAM ensures that for any two sequences of requests (of the same length), the distributions of the resulting sequences of operations are indis-tinguishable to the cloud storage. Existing ORAM schemes typically fall into one of the following categories: (1) layered (also called hierarchical), (2) partition-based, (3) tree-based; and (4) large-message ORAMs.

tl;dw: BREACH is back

But first, what is BREACH/CRIME?

This talk was a surprise talk, apparently to replace a canceled one?

a debriefing of the convention can be found here