Draft 19 has been published, this is a quick post talking about what has changed. This is mosty taken from the draft changelog as well as reading the commits since version 18. I've tried to keep up with what was important, but I ignored the many typos and small fixes, as well as what I think doesn't matter from draft to draft (exporters, cookies, ...)

The key schedule part of TLS 1.3 is quite tricky. At different stage of the connection a "secret" is derived from different inputs, and used again to derive different keys and IVs (to encrypt/decrypt data). When a new phase begins (for example when handshake messages need to be encrypted, or when the handshake is over and application data messages need to be encrypted) a new secret is derived and new keys can be derived from that secret.

Notice the Derive-Secret() function being used before re-using HKDF-Extract() again. This is new in Draft 19. This Derive-Secret() is the HKDF-Expand() function. If you know HKDF you know that it acts like a lot of different KDFs: in two steps. It extract the entropy given, and it then expands it. This was used to derive keys (you can see it with the arrows pointing on the right), but not to derive secrets. It is now fixed and that's why you can see it being used to derive the new Master secret. One of the positive outcome of this change is that HKDF can now more easily be replaced with another KDF.

Consolidate "ticket_early_data_info" and "early_data" into a single extension

This was an easy one.

The early_data extension was an empty extension used by a Client in the ClientHello message when it wanted to send 0-RTT data; and by a Server in the EncryptedExtensions message to confirm acceptance of the 0-RTT data.

The ticket_early_data_info was an extension that a Server would send in a ticket (for session resumption) to advertise to the Client that 0-RTT was available. It only contained one field: the maximum size of the data that should be sent as 0-RTT data.

Both are now merged under early_data which can be used for both purposes. Less extensions :) it's a good thing.

Change end_of_early_data to be a handshake message

To use the 0-RTT feature of TLS 1.3, a client can start sending 0-RTT data right after a ClientHello message. It is encrypted with a set of keys and IVs derived from the PSK and the ClientHello. The PSK will typically be some resumption secret from a previous connection, but it can also be a pre-shared key (yeah, you can't do 0-RTT if you don't already share some secret with the server). The image below is taken from the key schedule section.

New diagrams representing the different client/server state machines made their way in draft 19! TLS 1.3 will officially be the first TLS RFC to provide so many diagrams. And they're beautiful too, what an artistic performance. 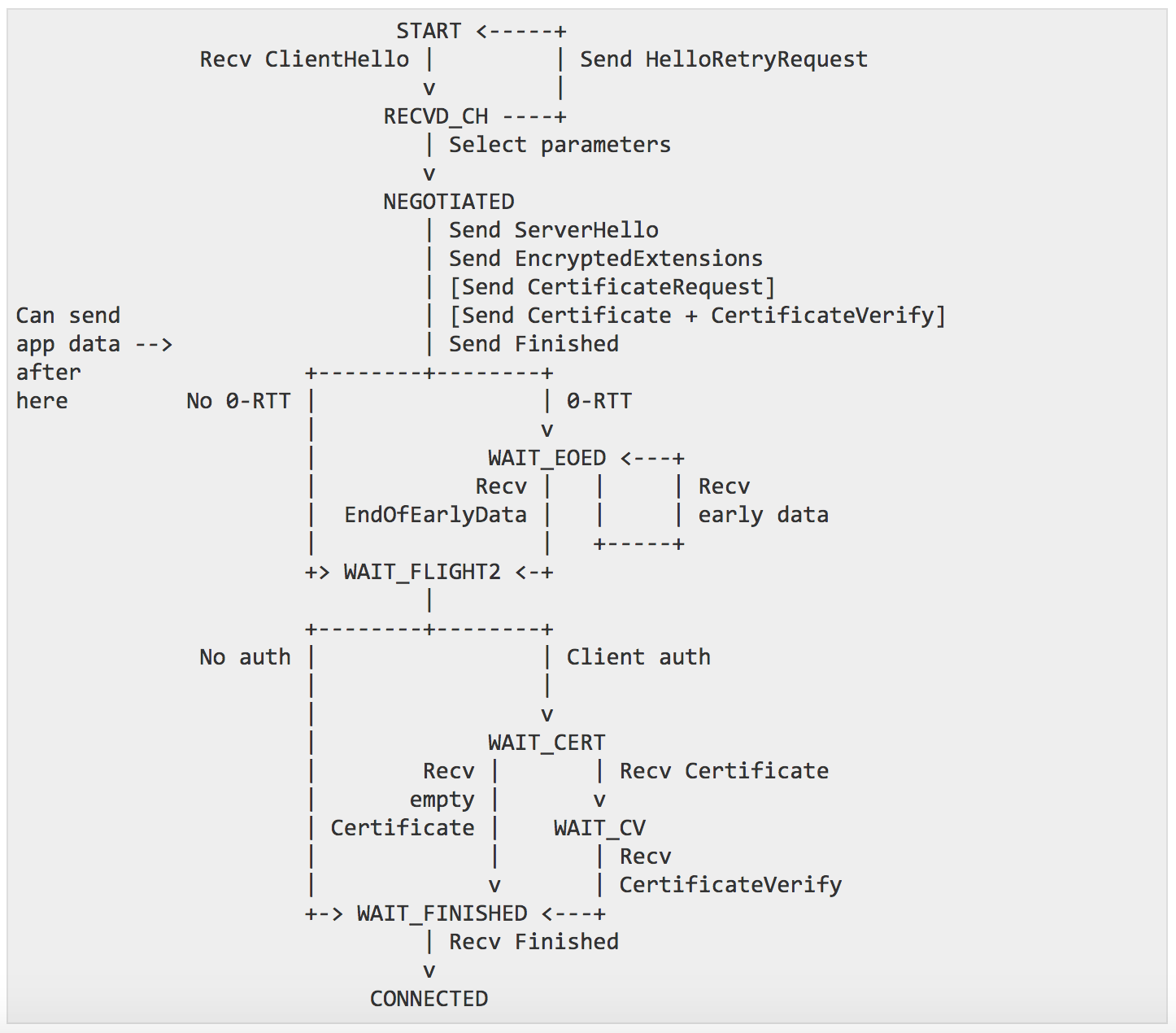 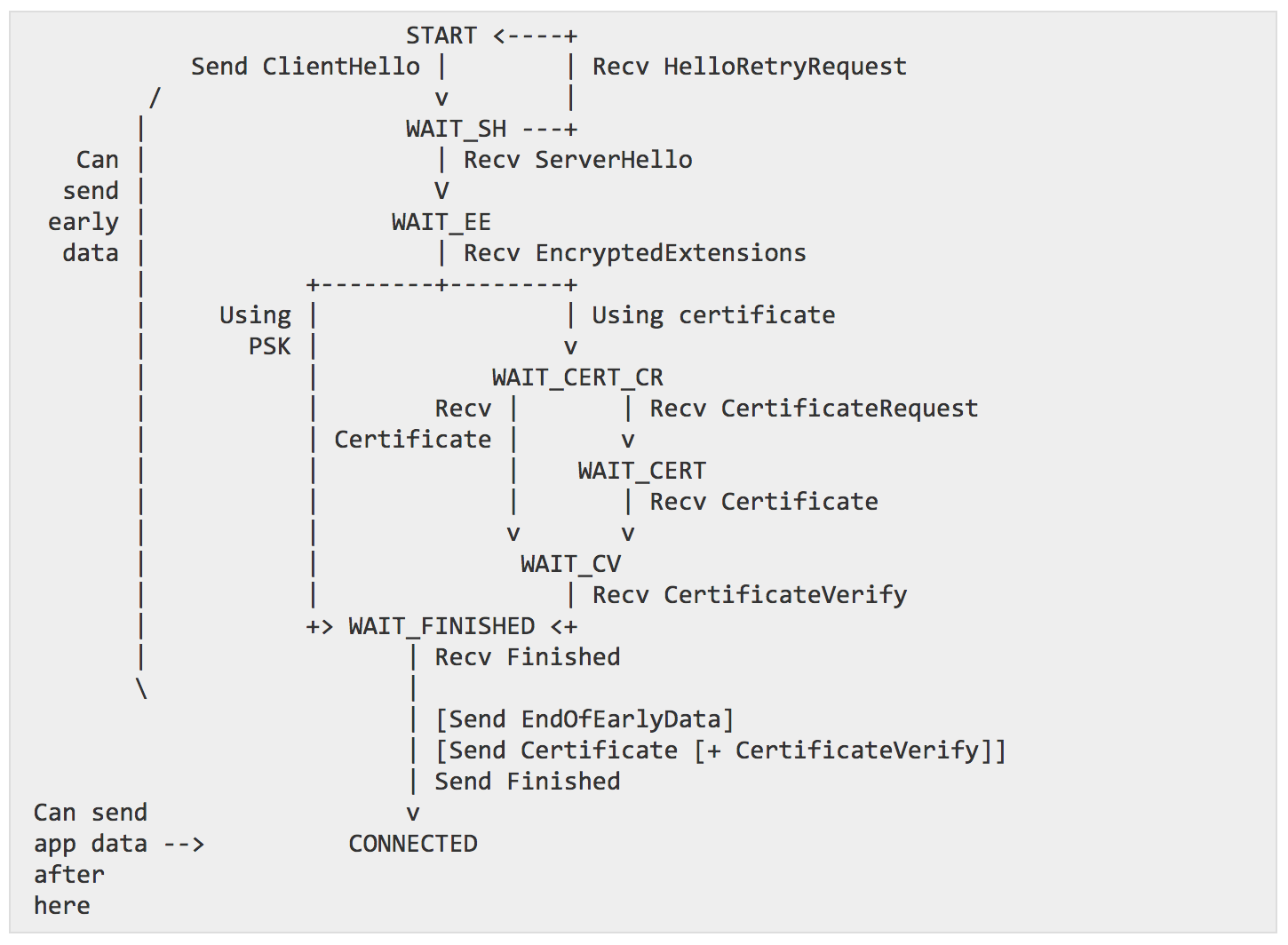 I haven't spotted anything else major. Some SHOULDs became MUSTs, and some MUSTs became SHOULDs. At the moment, I believe the PSK and 0-RTT flows are quite hard to understand. Perhaps a diagram representing the flow of PSK from a server or client would be nice to have. Eric Rescorla has pointed out a few questions that should be answered to move the draft forward. I've seen so many issues, PR and commits these last weeks that I'm wondering when TLS 1.3 will be considered ready... but it's moving forward :)

Great diagrams. I'm sure they will make my life easier when it comes to implementing TLS 1.3!