Password reuse is bad, what can we do about it? Naively, users could use different passwords for different websites, but there are two problems with this approach:

To alleviate these concerns, two solutions have been widely adopted:

An example of single-sign on (SSO) on the web. By having an account on Facebook or Google, a user can connect to new services (in this example Airbnb) without having to think about a new password.

The concept of SSO is not new in the enterprise world, but its success with normal end-users is relatively recent. Today, two protocols are the main competitors when it comes to setting up SSO:

SAML is still widely used, mostly in an enterprise setting, but it is at this point a legacy protocol. OpenID Connect, on the other hand, can be seen everywhere on web and mobile applications. You most likely already used it!

While OpenID Connect allows for different types of flows, let's see the most common use case for user authentication on the web via the authorization code flow: 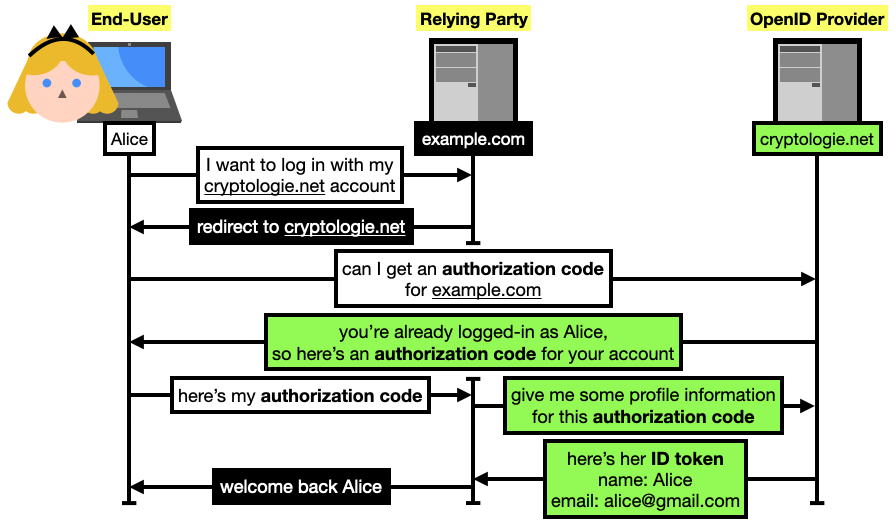 By the way, the proof given to example.com in step 4 is called an ID token in OpenID Connect, and is represented as a JSON Web Token (JWT) which is just a list of JSON-encoded data. 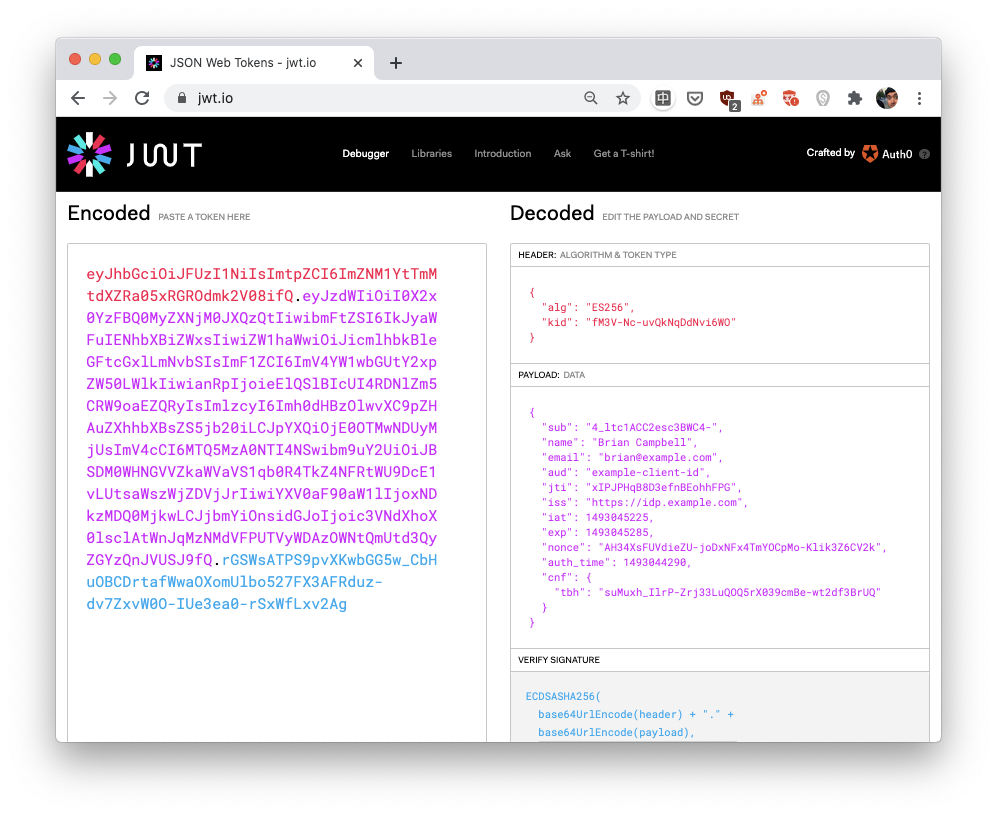 In OpenID Connect, if Alice wants to log in on example.com via her account on another website (an OpenID provider), example.com eventually needs to obtain what is called an "ID token." An ID token is some user information encoded via the JSON Web Token (JWT) standard. a JWT is simply the concatenation of three JSON-encoded objects. In the picture, the website https://jwt.io lets you decode a JWT and learn what every field stands for. In our browser-based example, example.com uses TLS to communicate with (and authenticate) the OpenID provider. Thus, the ID token it receives can be trusted. In other OpenID Connect flows (used, for example, by mobile applications) the ID token can be provided directly by the user, and can thus be tampered with. In this case, an ID token contains a signature which can be verified using the OpenID provider's public key.

Authentication protocols are often considered hard to get right. OAuth2, the protocol OpenID Connect relies on, is notorious for being easy to mis-use (see RFC 6819: OAuth 2.0 Threat Model and Security Considerations). On the other hand, OpenID Connect is very well specified. Make sure that you follow the standards and that you look at best practices, this can save you from a lot of trouble.

Here's another example of a pretty large company deciding not to follow this advice. In May 2020, the "Sign-in with Apple" SSO flow that took a departure from OpenID Connect was found to be vulnerable. Anyone could have obtained a valid ID token for any Apple account, just by querying Apple's servers.

SSO is great for users, as it reduces the number of passwords they have to manage, but it does not remove passwords altogether. The user still has to use passwords to connect to OpenID providers. If you're interested to know how cryptography can help to hide passwords, read the rest of this content in my book real-world cryptography.