As I talked about in a previous blogpost, Keccak and SHA3-3 are different in their bit convention, which gave birth to quite an overly complicated specification. The lack of good explanations in both the reference implementations and the reference documents led me to write this blogpost.

Now, I'll just acknowledge that most implementations, and even the specification, talk about using 0x80 for the final bit. This blogpost should answer why.

Keccak is specified in term of bits, but is discreetly aware of byte arrays as well. This is important as the rounds of Keccak require us to XOR parts of the input with lanes of the state. These lanes can be represented as uint64 types for keccak-f[1600], which we'll be looking at in this blogpost.

It could be hard to understand what is really going on in FIPS 202, but a look at an older version of the specification shows that Keccak interprets byte arrays in big-endian, but with an LSB bit numbering.

If you look at the Appendix B.1 of FIPS 202. You can see that before an input can be interpreted by SHA-3, it needs to go through some transformations.

Here is our own example of how it works with an input of 0xaebcdf. First the bits are re-mapped, then a padding is added, finally it is split into as many lanes as possible (here we have two 16-bit lanes):

The same examples with bits: 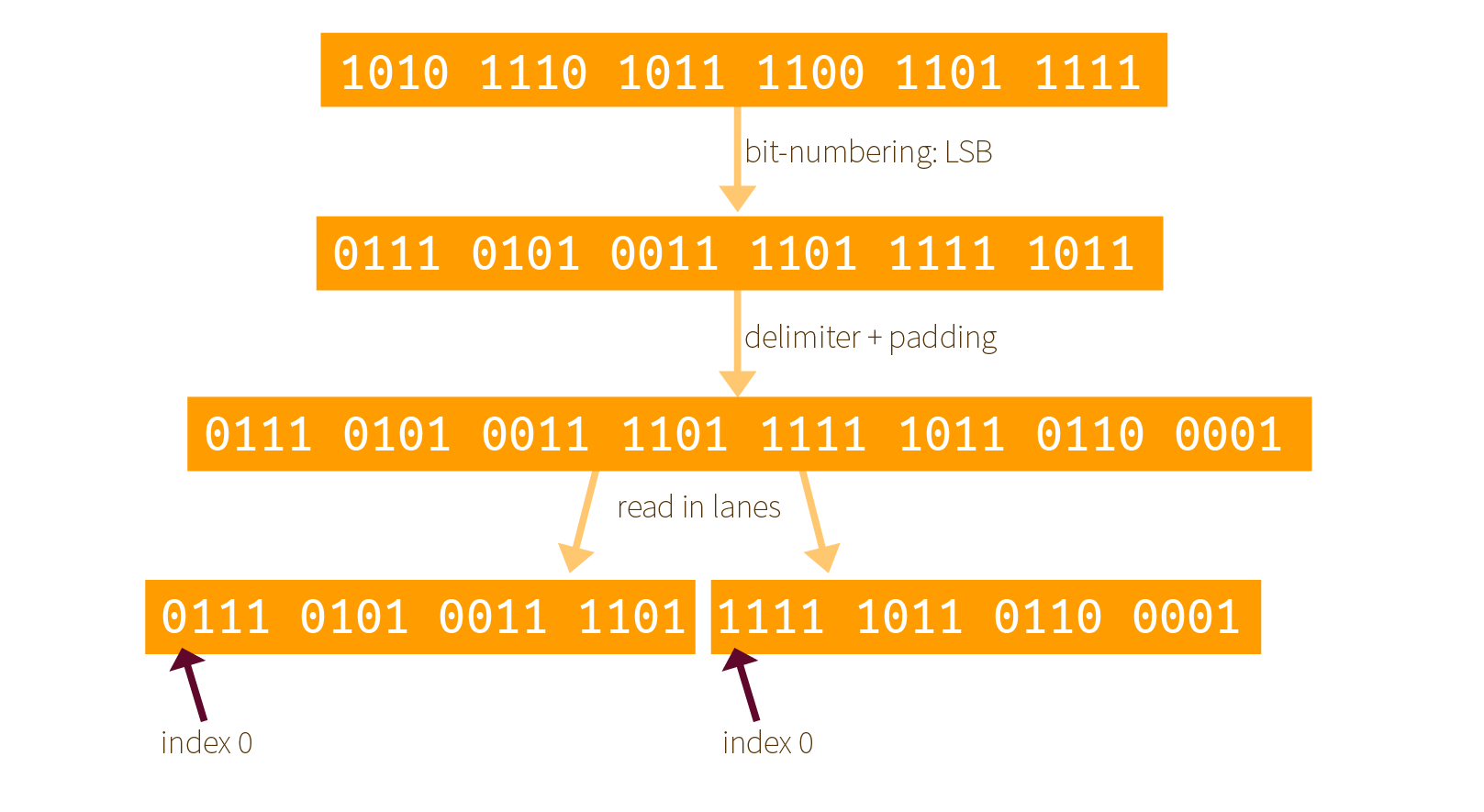 Two things that you must understand here:

Why is the indexing of a bitstring so important?

Because we later apply the permutation function on the state, and some of the operations need to know what are the indexes of each bits. More on that later.

How to implement the re-mapping

It must be annoying to reverse all these bits right? What about not doing it? Well brace yourself, there is indeed a clever trick that would allow you to avoid doing this. And this trick is what is used in most of SHA-3's implementations. Here is a graphical explanation of what they do:

By reading the byte array as little-endian, and using an already reversed delimiter + padding, some magic happens!

The result is exactly the same but in reverse order.

If you aren't convinced look at the following diagram (which shows the same thing with bits) and look at the previous section result. Same, but the bitstream is readable in the reversed direction.

This means that now the index 0 of Keccak's internal ordering is on the right, not on the left. How will it influence the round functions that apply on our lanes? 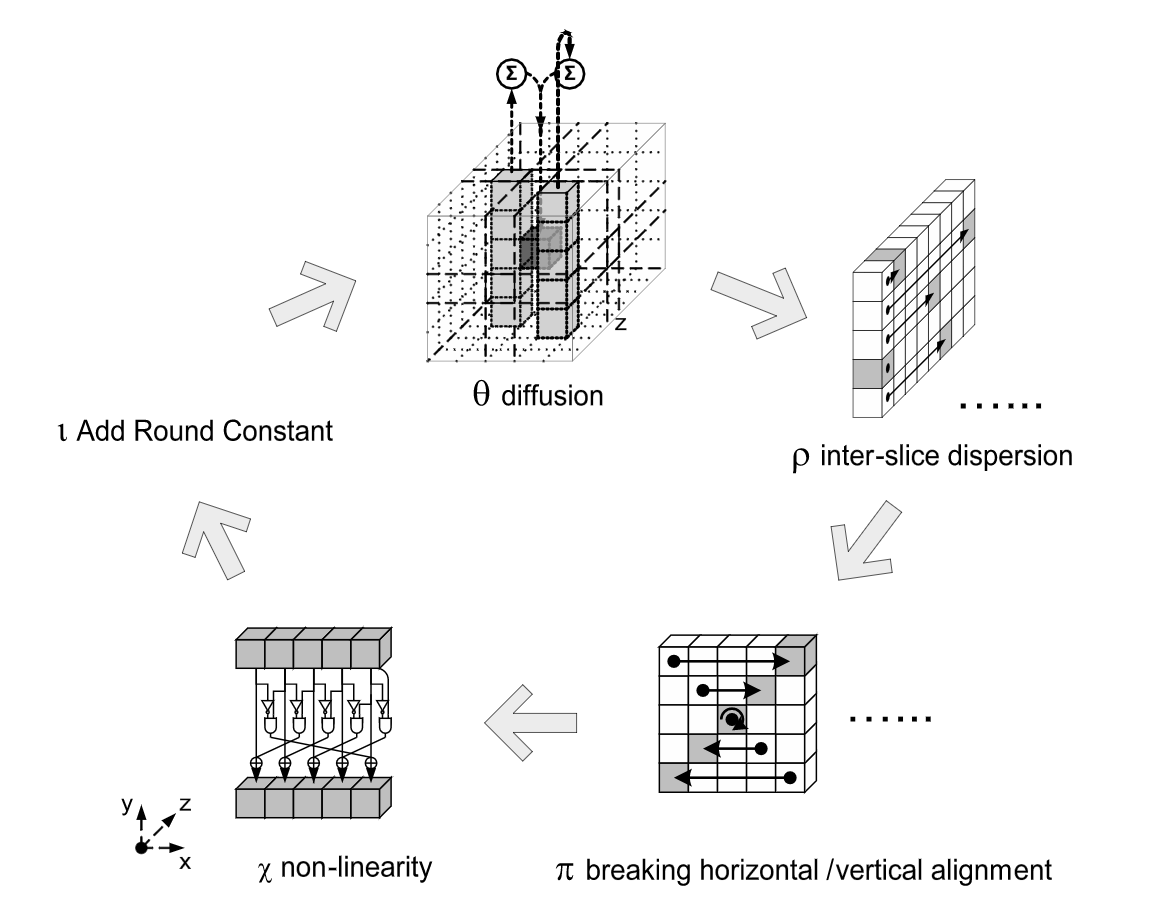 It turns out that a lot of operations are unchanged. Who would have known that XORs, ANDs and NOTs operations were not affected by the order of the bits! but only some rotations and bit positioning are. If you look at the reference implementations you will see that indeed, rotations have been reversed (compared to what the reference tells you to do).

And this is how a clever implementation trick made its way in a specification with no real explanation.

in the keccak reference, it says only the last byte (<8 bit) needs to reverse, why?

not sure what part of the spec you're talking about

> ... operations were not affected by the order of the bits! but only some rotations and bit positioning are.

Could you include the affected operations in your post, please? That would be very helpful!

Great explanation! Thanks!
You have a tiny error - in the first scheme you didn't specify step 2 of adding the first 1 bit of the start of padding.

Going by the steps mentioned in the link below, it seems like the pad is appended first and the bit reversal happens after that. Could you please clarify?

How the computer stores data as bits is doesn't matter since the smallest addresable data is *always* byte. Only from there starts the difference between big/little-endian.

Anything written by human / on paper is always big-endian.

Your example number, 0xaebcdf will be stored *differently* between Intel (df,bc,ae,00) and ARM(00,ae,bc,df) which of course will be wrong since there's no 3 bytes data type in any known computer, what you mean possibly was ARM(ae,bc,df,00) which is (00,df,bc,ae) in intel or 0xaebcdf00 in human term. that's why chunking data in block is important.