CVE-2016-3959 also called the golang infinite loop just triggered a new version of the language Go. The cherry on the cake is that it was discovered by me!

The issue was announced here on github, and in a bunch of different places. Here's a short Q/A to explain what's up:

A: Anything that uses the big.Exp function concurrently where the modulo parameter can be controlled by an attacker. For crypto this means mostly DSA and RSA which are used for example in TLS and SSH, as well as many other cryptographic applications, like recently in the Let's Encrypt client (hope they patched). ECDSA also use the big.Exp function but this elliptic curve version of DSA usually does not use custom curves so the attacker has usually no known way to make someone compute calculations over his curves parameters if they are non-standard.

A: It's the exponentiation function of Go. Declared in the big number library of Go: big.

A: Programming languages have int types that can usually hold integers up to 64bits (For example, in C this type is called uint64_t). But crypto needs numbers that are much bigger than that, up to 4000 bits sometimes. So big number libraries are the libraries used to play with numbers of such sizes without getting a headache =)

Q: What was the problem with big.Exp?

A: It was a pretty simple one, the lack of a zero check for the modulus made the calculation turn into an infinite loop. Interestingly the developers of Go did not patch the vulnerability by adding the zero check inside of big.Exp but did it inside of the implementations of DSA, RSA and ECDSA. This means that other cryptographic functions or non-cryptographic functions that employ this big.Exp function, concurrently, with the third parameter controlled by the user, might still be subject to DoS attacks.

If you have any other questions feel free to ask! The comment section is here for that ;)

There is an excellent blogpost here on how would you go about getting into an encrypted phone.

I asked some questions to one of the co-author Adwait Nadkarni, I thought that it might be interesting to others:

But offline attacks can also be much harder, because they require either trying every single possible encryption key, or figuring out the user’s passcode and the device-specific key (the unique ID on Apple, and the hardware-bound key on newer versions of Android).

Q: I don't understand why you would have to guess that HBK, can't you just access it on the phone?

That said, the reality is manufacturer-dependent. The TEE on different devices has been repeatedly compromised (Qualcomm TEE implementation compromised in 2014, HTC in 2015, etc.). Thus, there is threat of software compromise that may allow the attacker to retrieve or misuse the HBK.

Q: Is the secure enclave on the recent iPhones that TEE? Does that mean that most phones are vulnerable to offline brute force attacks? (since most phone don't have TEE (I'm not sure about that) and have a 4-6 digit PIN instead of an alphanumeric password)

A: The TEE is for Android; iOS uses secure enclave similarly. Most phones that do not use a device-specific key (i.e., old Android devices that run <Android 4.4, very old iOS devices) are vulnerable to offline brute-force attacks. Most phones (even old ones like our Nexus 4) do have TEE.

We built our own MDM application for our Android phone, and verified that the passcode can be reset without the user’s explicit consent; this also updated the phone’s encryption keys. We could then use the new passcode to unlock the phone from the lock screen and at boot time

Q: if you do that, the content on the phone would have to be decrypted with the real passcode and re-encrypted with your new passcode. I would imagine that the real passcode is not stored anywhere (there should be a password hash stored instead for verification only), so how does that technique works for the decryption phase? (don't know if the question is clear enough)

Q: so, specifically then, how does the phone uses the old KEK if it doesn't have the old passcode?

A: The old KEK is not created on the fly, but stored in the hardware-backed keystore (accessible only via the TEE). The TEE can retrieve it to decrypt the encrypted DEK.

Generally, operating system software is signed with a digital code that proves it is genuine, and which the phone requires before actually installing it.

this part made me wonder, what if we used lasers? Fault attacks are a big thing in the smart card industry, why is no one talking about it for cellphones? This prompted me to ask Frederico Menarini from Riscure:

Q: In iOS or Android if you want to update the phone, the update needs to be signed with Apple or Google or Samsung, etc... update key. But what you could do if you could mount a fault attack (lasers?) would be to target the point where the cellphone refuses the patch because of a false signature.

A: In principle, fault attacks are possible on phones – nothing prevents it and the scenario you described is valid. Laser attacks might be challenging though because certain chips use package-on-package or chip stacking, which means that you might not be able to directly affect the CPU using light.

In general attacking mobile phone chips will be complicated because they run at extremely high frequencies compared to smartcards (smartcards rarely run faster than 50 MHz) and because the feature size is much smaller (state of the art in smartcards is 90nm, which makes targeting the right area of the chip with a laser easier).

Here's a little demo of my work in progress research =)

The top right screen is the client, the bottom right screen is the server. I modified two numbers in some Socat file (hopefully it will be one number soon) and the backdoor is there. It's a public value and both the server and the client can generate their own certificates and use them in the TLS connection. For simplicity I don't do that, but just know that it would change nothing.

To get a Man-in-the-middle position I took the simplest approach I could think of: the screen on the left is a proxy, the client connect to the server through the proxy.

For simplicity again (this is a proof of concept) I only use TLS 1.2 with AES128-CBC as the symmetric cipher and SHA-256 as the hash function used in the PRF/MAC/etc...

Got my graphic tablet back, needed to do a small video to get back into it so I made something on Pollard's p-1 factorization algorithm:

You can find the records on factoring with p-1 on loria.fr, the biggest prime factor found was of 66 digits (~220bits) using B1=10^8 and B2=10^10. But people have been using bigger parameters like B1=10^10 and B2=10^15. It doesn't really make sense to continue using p-1 after that, and more efficient algorithms that still have a complexity tied to the size of the smallest factor exist. The Elliptic Curve Method (Or Lenzstra factorization method) is one of them, and is carrying the same ideas as p-1 in the elliptic curves.

In the video I also don't talk about B2. This is if you have a factorization of p-1 that is B1-powersmooth, except for a large single prime. You can just set a B2 which would be larger than this last factor and try every factor between B1 and B2. There are some optimizations that exist to do that faster instead of doing it naively but this is it. 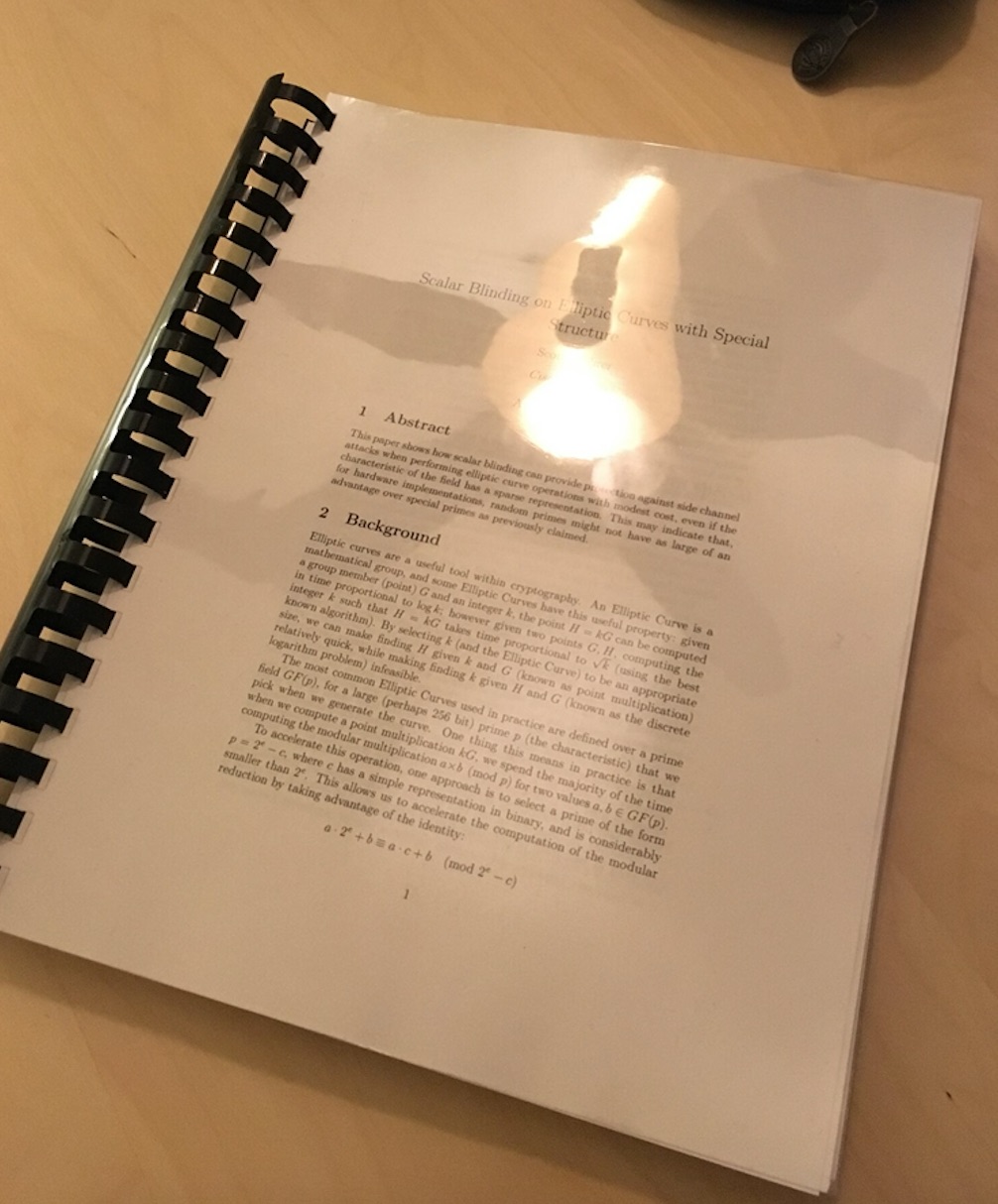 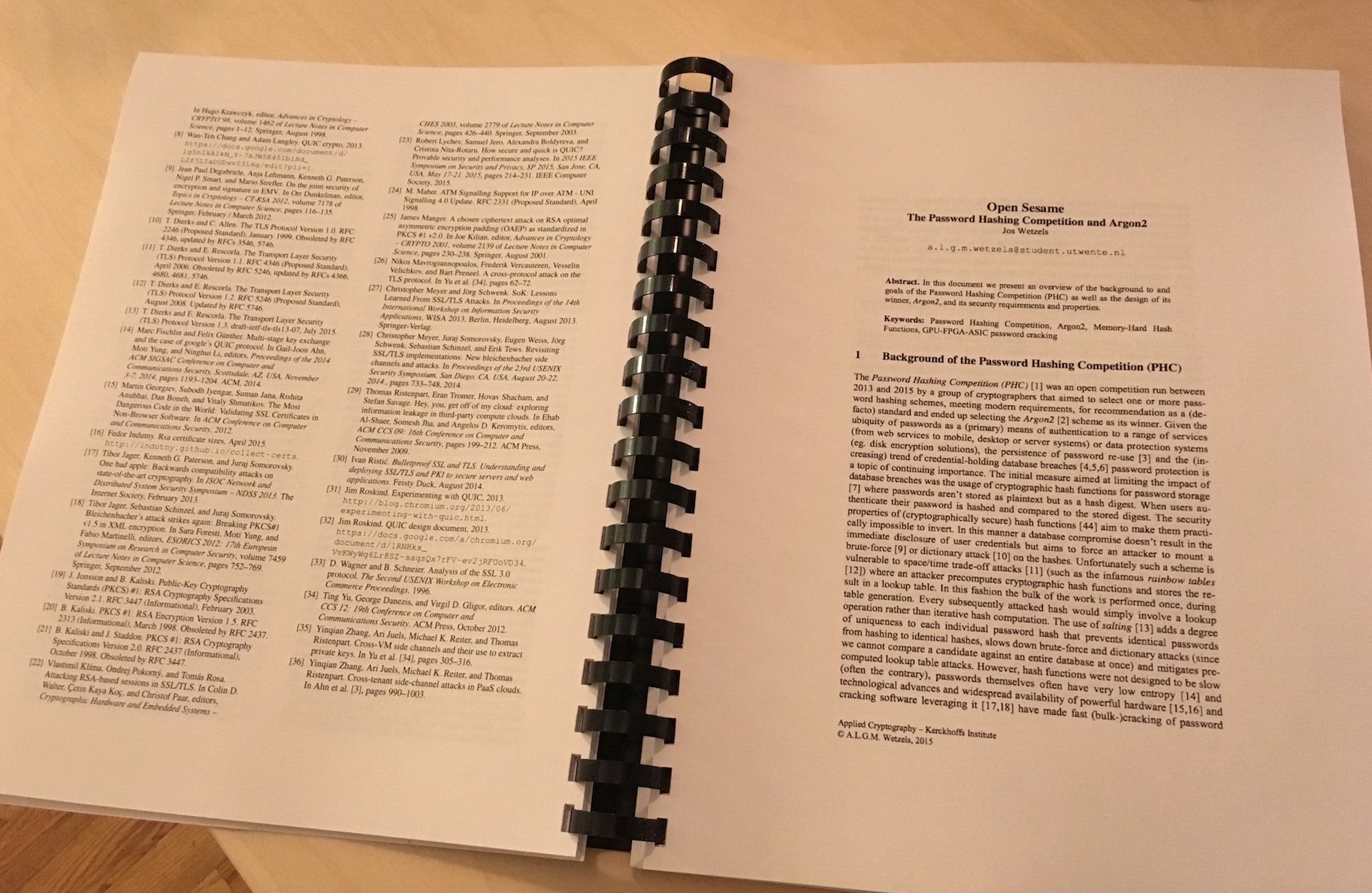