There are several cryptocurrencies that are doing really interesting things, Algorand is one of them. Their breakthrough was to make a leader-based BFT algorithm work in a permissionless setting (and I believe they are the first ones who managed to do this). At the center of their system lies a cryptography sortition algorithm. It's quite interesting, so I made a video to explain it!

PS: I've been doing these videos for a while, and I still don't have a cool intro, so if you want to make me a cool intro please do :D

My colleague Mesut asked me if using random identifiers of 128-bit would be enough to avoid collisions.

I've been asked similar questions, and every time my answer goes something like this:

you need to calculate the number of outputs you need to generate in order to get good odds of finding collisions. If that number is impressively large, then it's fine.

The birthday bound is often used to calculate this. If you crypto, you must have heard of something like this:

with the SHA-256 hash function, you need to generate at least 2128 hashes in order to have more than 50% chance of finding collisions.

And you know that usually, you can just divide the exponent of your domain space by two to find out how much output you need to generate to reach such a collision.

Now, this figure is a bit deceiving when it comes to real world cryptography. This is because we probably don't want to define "OK, this is bad" as someone reaching the point of having 50% chance of finding a collision. Rather, we want to say:

someone reaching one in a billion chance (or something much lower) to find a collision would be bad.

In addition, what does it mean for us? How many identifiers are we going to generate per second? How much time are we willing to keep this thing secure?

To truly answer this question, one needs to plug in the correct numbers and play with the birthday bound formula. Since this is not the first time I had to do this, I thought to myself "why don't I create an app for this?" and voila. 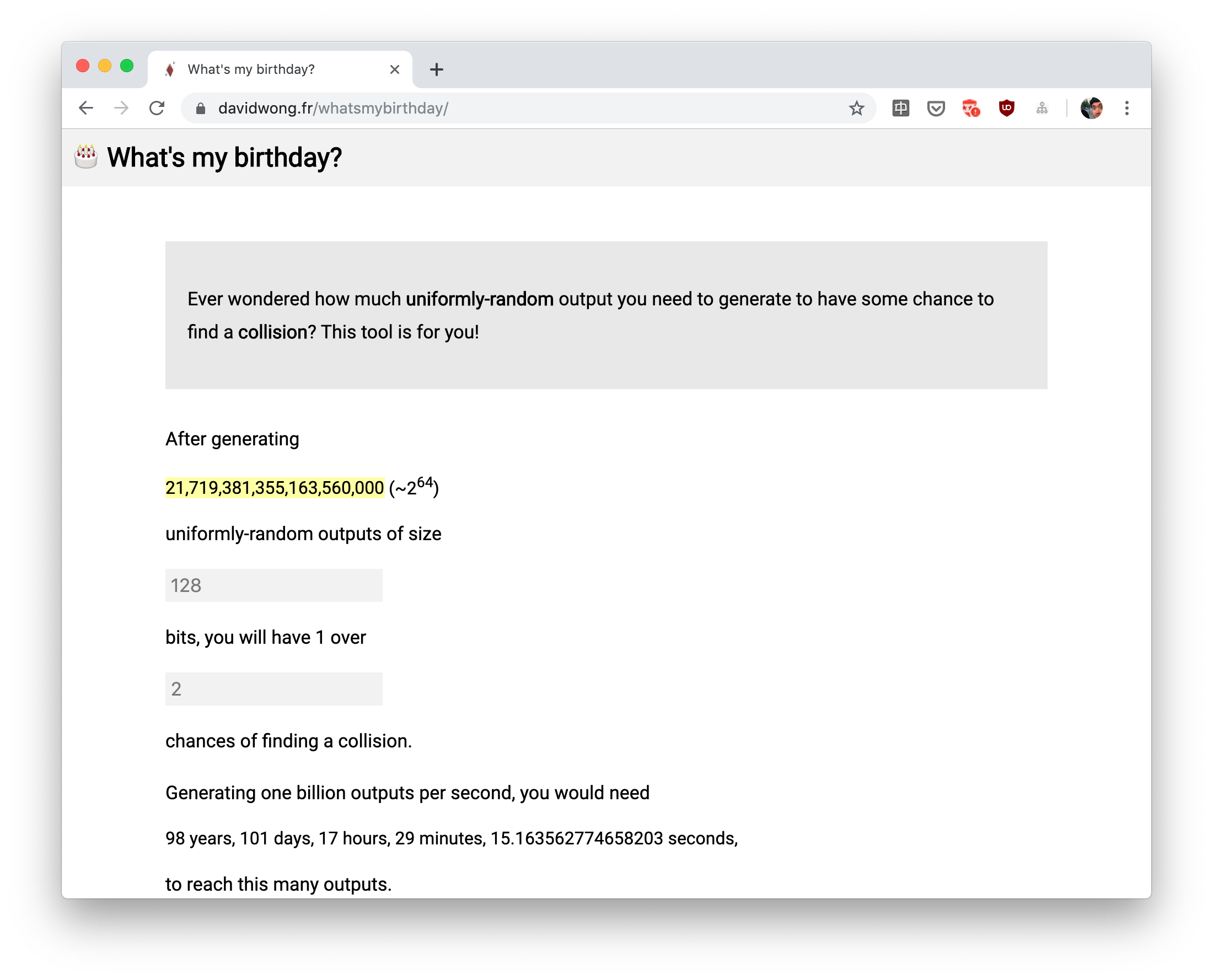 You can play with it here.

Thanks to my tool, I can now answer Mesut's question:

If you generate one million identifiers per second, in 26 years you will have one in a billion chance to generate a collision. Is this enough? If this is not adversary-controlled, or it is rate-limited, you will probably not generate millions of identifiers per second though, but rather thousands, in this case it will take 265 centuries to get these odds.

Manning Publications reached out to me last year with an opportunity for a book. I had been thinking of a book for quite some time, as I felt that the landscape lacked a book targeted to developers, students and engineers who did not want to learn about the history of cryptography, or have to sort through too many technical details and mathematic formulas, and wanted an up to date survey of modern applied cryptography. In addition, I love diagrams. I don’t understand why most books underuse them. When you think of AES-CTR what do you think about? I bet the excellent diagrams from Wikipedia just flash in your mind.

The book Real World Cryptography was released today in pre-access. This means you’ll be able to read new chapters as I write them, and be able to provide feedback on topics you wished I would include and questions you wish I would answer.

At 2am this morning Libra was released.

and it seems to have broken the internet (sorry about that ^.^")

I've never worked on something this big, and I'm overwhelmed by all this reception. This is honestly pretty surreal from where I'm standing.

Libra is a cryptocurrency, which is on-par with other state-of-the-art blockchains. Meaning that it attempts to solve a lot of the problems Bitcoin originally had:

On top of that, it is probably one of the most interesting projects in cryptography right now. The codebase is in Rust, it uses the Noise Protocol Framework, it will include BLS signatures and formally verified smart contracts. And there's a bunch of other exciting stuff to discover!

If you're interested you should definitely check the many papers we've published:

I've read many comments about this project, and here's how I would summarize my point of view: this is a crazy and world-scale project. There are not many projects with such an impact, and we'll have to be very careful about how we walk towards that goal. How will it change the world? Like a lot of global projects, it will have its ups and downs, but I believe that this is a positive net worth project for the world (if it works). We're in a unique position to change the status quo for the better. It's going to be exciting :)

If you're having trouble understanding why this could work, think about it this way. You currently can't transact money easily as soon as you're crossing a border, and actually, for a lot of countries (like the US) even intra-border money transfers are a pain. Currently the best banks in the world are probably Monzo and Revolut, and they're not available everywhere. Why? Because the banking system is very complex. By using a cryptocurrency, you are skipping decades of progress and setting up a interoperable network. Any banks and custody wallets can now use this network. You literally get the same thing you would get with your normal bank (same privacy, same usability, etc.) except that now banks themselves have access to a cheap and global network. The cherry on top is that normal users can bypass banks and use it directly, and you can monitor the total amount of money on the network. No more random printing of money.

A friend compared this project to nuclear energy: you can debate about it long and large, but there's no doubt it has advanced humanity. I feel the same way about this one. This is a clear improvement.

A book in preparation posted June 2019

I've started writing a book on applied cryptography at the beginning of 2019, and I will soon release a pre-access version. I will talk about that soon on this blog!

(picture taken from the book)

The book's audience is for students, developers, product managers, engineers, security consultants, curious people, etc. It tries to avoid the history of cryptography (which seems to be unavoidable in any book about cryptography these days), and shy away from mathematical formulas. Instead, it relies heavily on diagrams! A lot of them! As such, it is a broad introduction to what is useful in cryptography and how one can use the different primitives if seen as black boxes. It attempts to also serve the right amount of details, to satisfy the reader's curiosity. I'm hopping for it to be a good book for quickly getting introduced to different concepts going from TLS to PAKE. It will also include more modern topics like post-quantum cryptography and cryptocurrencies.

I don't think there's anything like this yet. the classic Applied Cryptography is quite old now and did not do much to encourage best practices or discourage rolling your own. The excellent Serious Cryptography is more technical and has more depth than what I'm aiming for. My book will rather be something in between, or something that would (hopefully) look like Matthew Green's blog if it was a book (minus a lot of the humor, because I suck at making jokes).

Have you ever wondered why byzantine agreement protocols seem to all start with the assumptions that less than a third of the participants can be malicious?

This axiom is useful down the line when you want to prove safety, or in other words that your protocol can't fork. I made a diagram to show that, an instance of the protocol that forks (2 proposals have been committed with 2f+1 votes from the participants) is absurd. 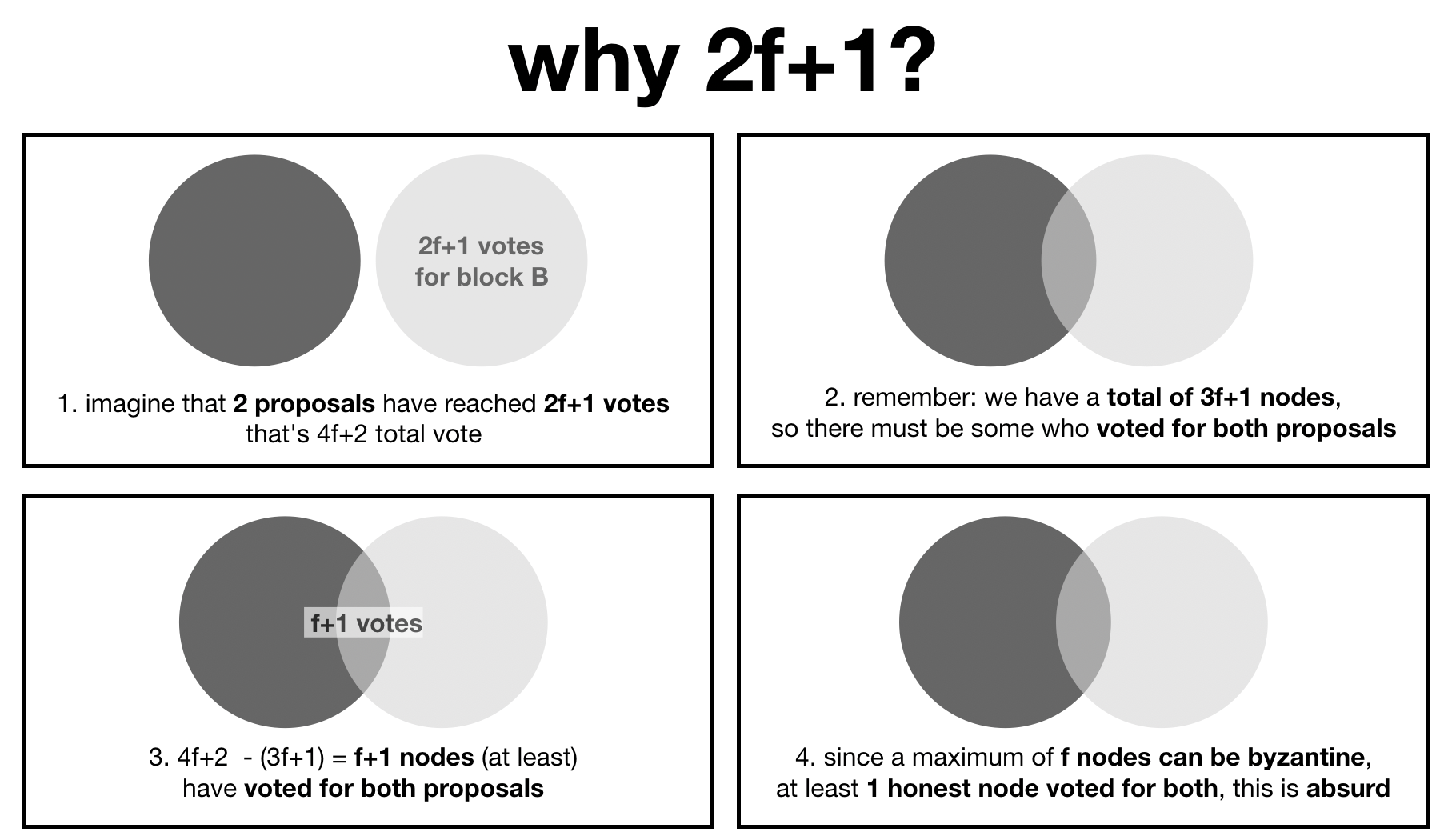 As I'm transitioning to the Blockchain team of Facebook, I decided it would be a good time to give this place a bit of a refresh :) 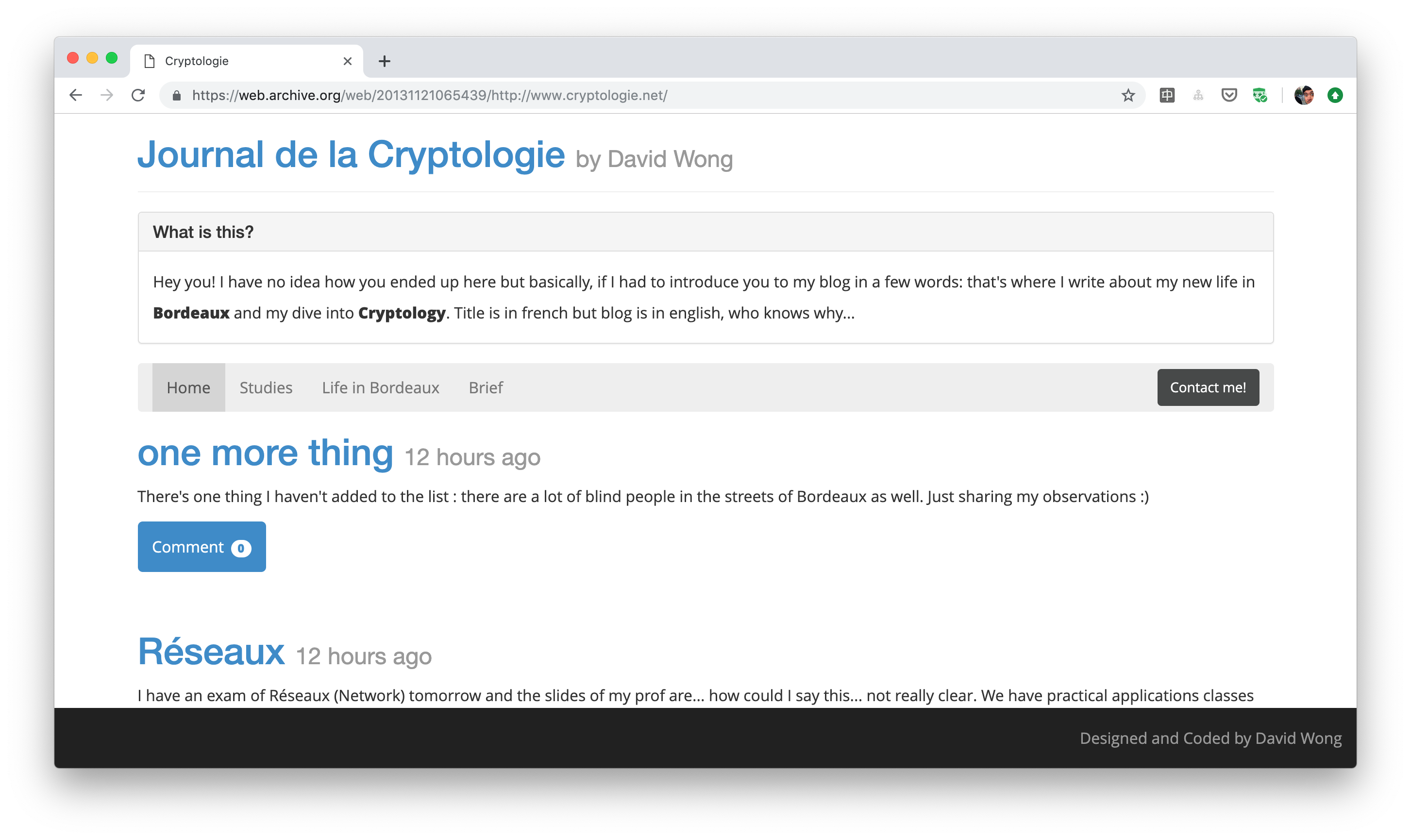 I quickly found out a layout I liked and sticked with it. In 2014 it looked like this: 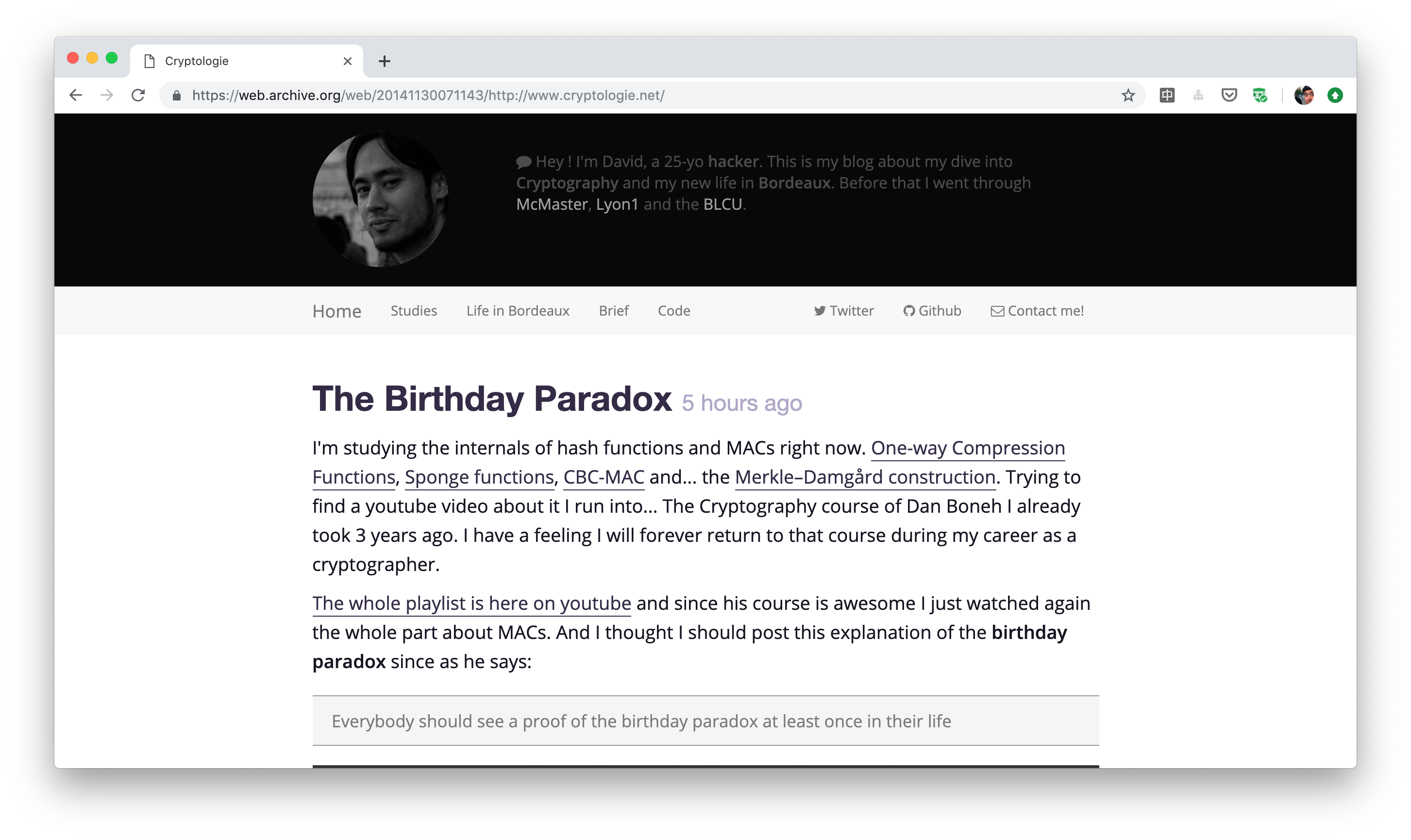 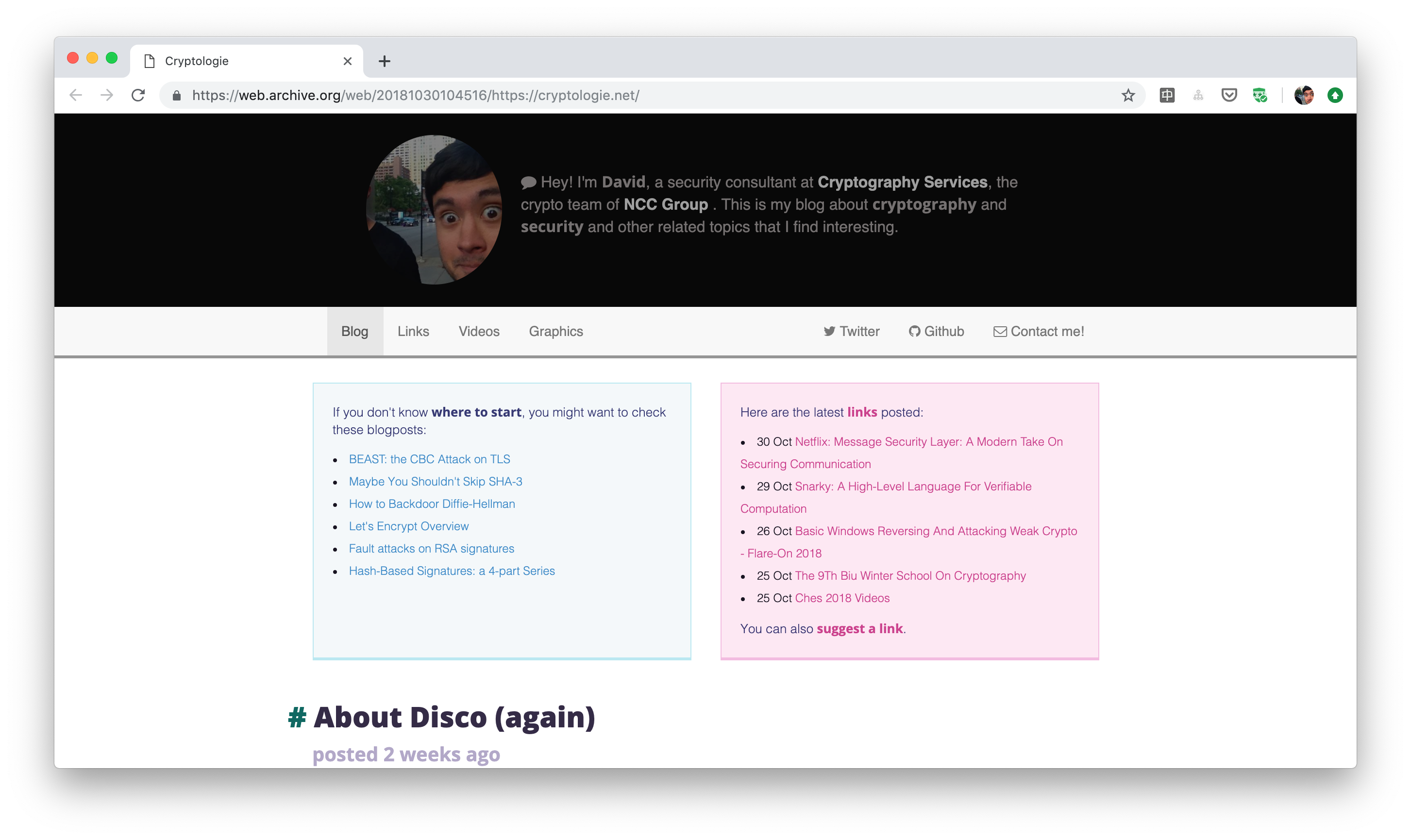 And finally the new re-design which should be brighter: 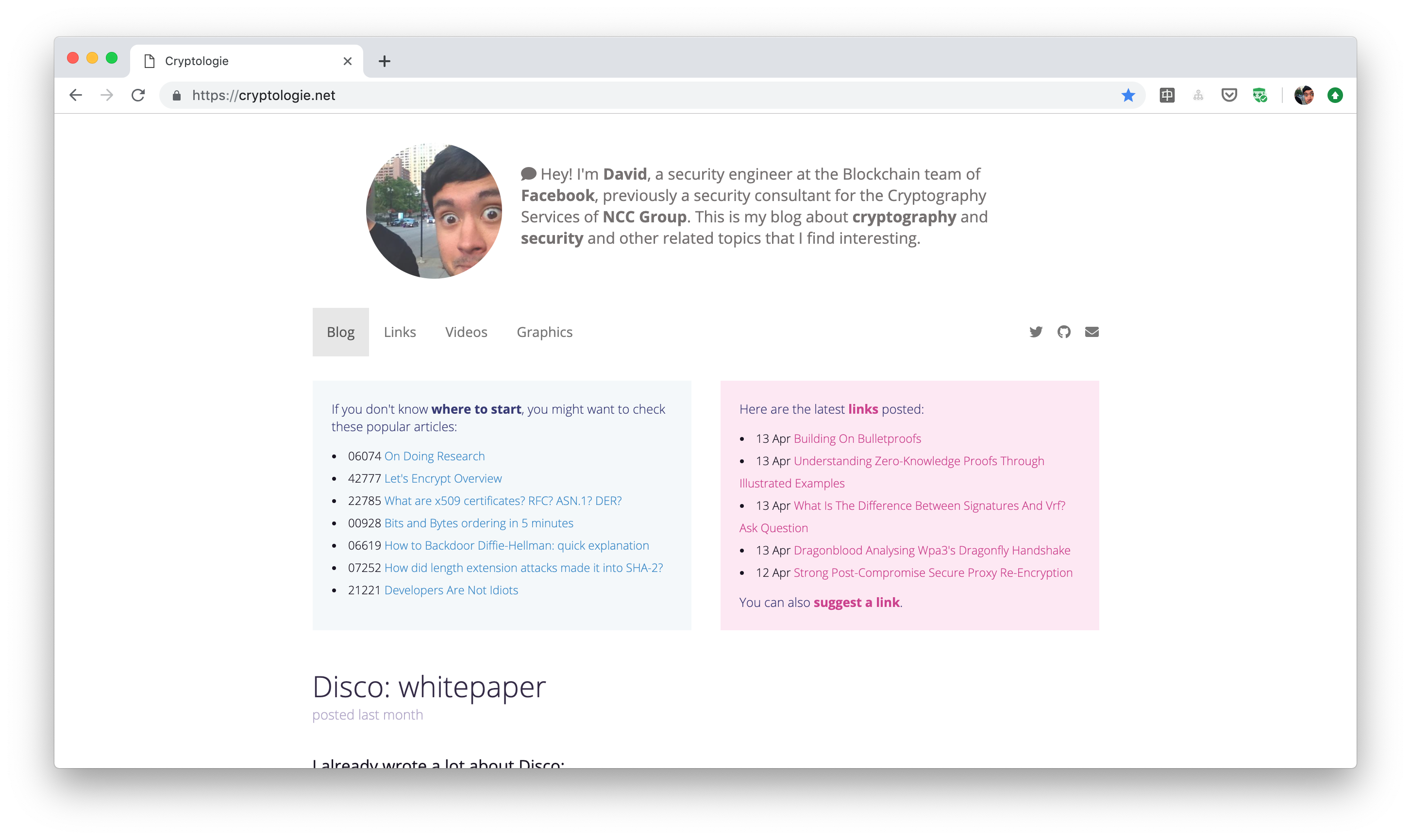 I already wrote a lot about Disco:

Today, I released the white paper that introduces the construction. Check it out on ePrint. 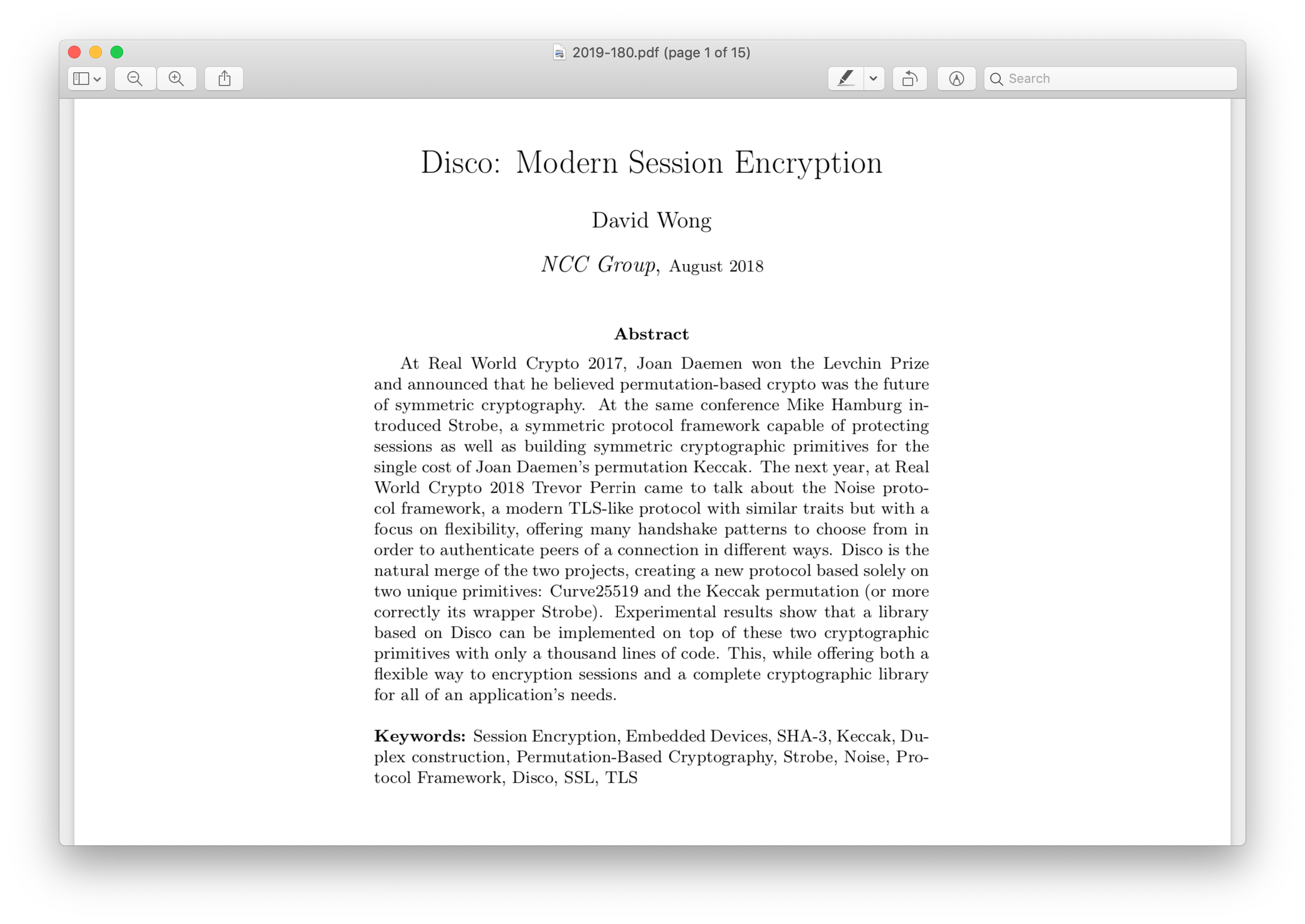 It's a combination of everything I've talked about, plus: