I've been writing (although mostly reading) OCaml on-and-off this last year. It's been quite a painful experience, even though I had some experience with functional languages already (erlang, which I really liked).

I find the language and the experience very close to C in many ways, while at the same time boasting a state of the art type system. It's weird. I think there's a real emphasis on the expressiveness, but little on the engineering. Perhaps this is due to the language not having enough traction in the industry.

So about this, I have two things I'd like to say. The first, is that if you're looking for a somewhat low-level (there's a garbage collector) language you can make a real dent in, OCaml might be the one. It's pretty bare bone, not that many libraries exist, and if they do they are barely usable due to a lack of documentation. My first contribution was a library to encode and decode hexadecimal strings, because I couldn't find one that I could use. That should tell you something.

My second contribution was a tool to build "by example" websites. I used it to make a website to learn OCaml by examples, and another one to learn Nix by example. How cool would it be if people started using it to build a number of "by examples" websites in the OCaml ecosystem :D?

Anyway, I digress, the second thing I wanted to say is: if you're working on OCaml (or want to contribute to a new language), here's my wishlist:

PS: would someone actually be interested to work on any of these for a grant? There's a number of new-ish companies in the OCaml space that would probably pay for someone to solve these. I guess reach out to me on the contact page if you're interested.

I just implemented method calls in noname, and I made a video showcasing it and checking if the implementation is correct with some simple examples.

Don't forget, if you want to play with it check it out here: https://github.com/mimoo/noname and if you have any questions or are running into something weird please leave a comment on the Github repo!

I guess this is part 3. With part 1 introducing noname, a programming language inspired by rust that makes use zero-knowledge proofs to provide verifiable computation, part 2 going over a simple arithmetic example and part 3 going over custom types.

In this update, I showcase a new feature: functions, and go through the debug compilation of an example program to see if the implementation is sound (that it constrains what it is supposed to constrain). In this video I do something more: I optimize the implementation of assert_eq so that you can see a bit of the compiler internals. I also end the video abruptly, thinking I found a bug in the implementation. If you were an attentive student, you would have figured out that there was no bugs: doing things on constants does not create any gates.

You can play with the noname language here! And you can read the noname book as well.

noname is the DSL I'm working on to write rust-like programs and prove their executions using zero-knowledge proofs.

The previous post used noname as an education tool to explain how programs get compiled to gates and constraints.

In this post, I showcase a new feature: custom gates, and go through the debug compilation of an example program to see if the implementation is sound (that it constrains what it is supposed to constrain).

Don't forget, you can play with the noname language here! And you can read the noname book as well.

I've talked about noname previously, my toy side project to create a DSL to write zkapps on top of kimchi.

I've recorded a video that showcase it, and walks through the circuit output by compiling one of the example. It might not make too much sense if you don't know about kimchi or plonk. And so you might want to watch my series of videos on plonk beforehands.

you can play with the noname language here

Two And A Half Coins episode 4: More on Bitcoin: 51% attacks and Merkle trees! posted 4 weeks ago

New episode on the podcast!

the noname language, a toy DSL for zkapps posted 4 weeks ago

I've been spending a few weekends working on a DSL for writing zero-knowledge programs. It's been a fun project that's taught me a LOT about programming languages and their designs. I've always thought that it'd be boring to write a programming language, but my years of frustrations with languages X and Y, and my love for features Z and T of L, have made me really appreciate tweaking my own little language to my preferences. I can do whatever I want!

It's called "noname" because I really didn't know what name to give it, and I still haven't found a good one. You can play with it here: https://github.com/mimoo/noname, it is still quite bare bone but I'm amazed at what it can already do :D

It is very close to Rust, with some ideas from Golang that I liked. For example, I do not implement too much inference because it decreases readability, I force the user to qualify each library calls, I forbid shadowing within a function, etc.

and you can use the CLI to write your own programs, and generate proofs (and verify them). Underneath the kimchi proof system is used.

But the really cool feature is how transparent it is for developers! If you run the following command with the --debug option for example:

you will get a nice output teaching you about the layout of the compiled circuits: 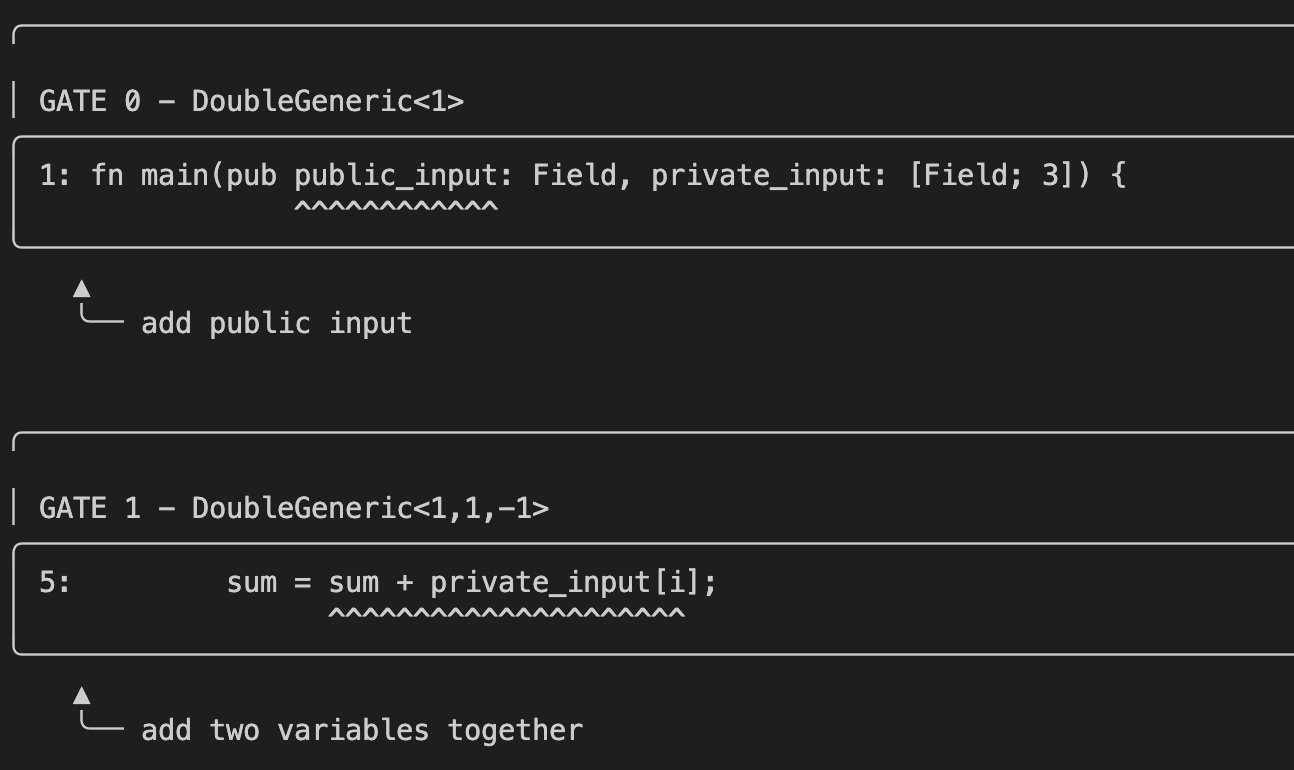 as well as how the wiring is done: 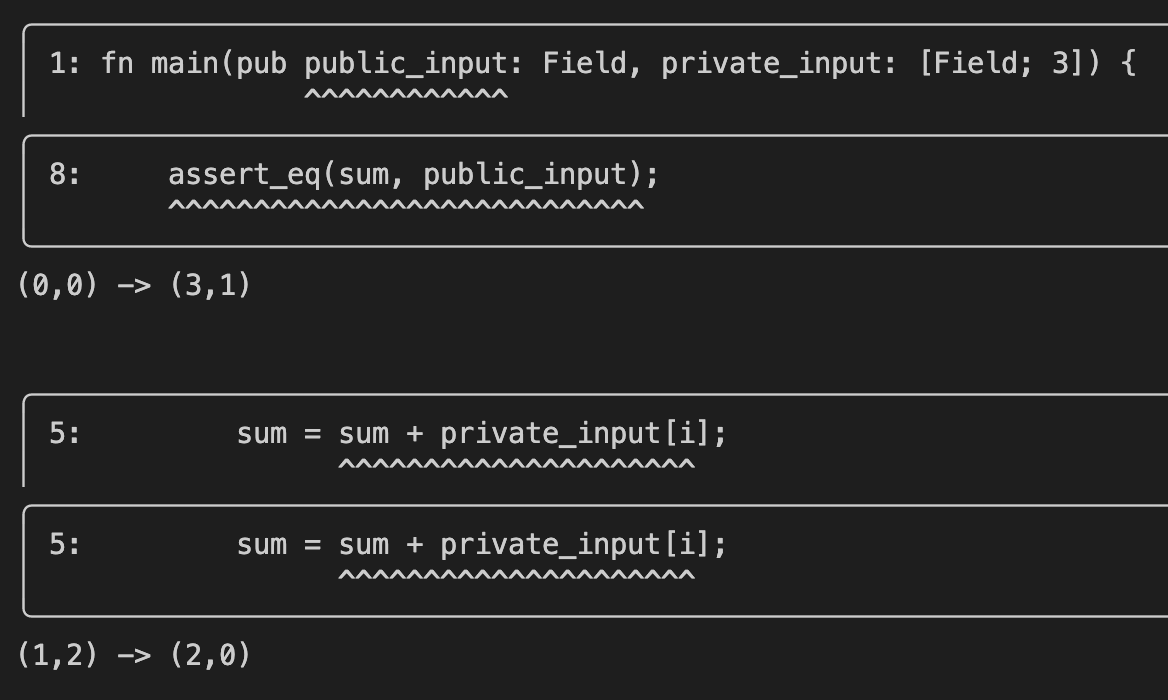 I think there's a lot of educational benefit from this approach. Perhaps I should make a video going over a few circuits :)

I'm launching a podcast: Two And A Half Coins posted last month

It's been forever since I've been thinking of doing a podcast. Today I decided screw it, I'll do it live.

This series focuses on teaching you about cryptocurrencies from the very start! We'll start with databases, banks, distributed systems, and we will then go further with Bitcoin, Ethereum, Mina, and other cryptocurrencies that are making the world advance today.

Listen to it here or on your favorite platform:

Or just listen to it here:

Cryptocurrencies from scratch: databases, the banking world, and distributed systems

Bitcoin from scratch: The Bitcoin client, public keys and signatures, and the miners

In the previous episode we briefly talked about what cryptocurrencies fundamentally are, and what problems they attempt to solve. In this episode we'll dig int our very first cryptocurrency: Bitcoin. This will be a high-level overview that will cover what the software looks like, what cryptographic signatures are, and who are these miners who process transactions.

More on Bitcoin: How does mining work? What are hash functions? And what is Proof of Work?

In this third episode we'll dig more into the tech of Bitcoin. But for that, we'll need to talk briefly about cryptographic hash functions and how they work. Once done, we'll talk about mining, proof of work, chains of blocks, and mining pools!