Nothing up my sleeve numbers posted February 2015

Why does the round constants in sha1 have those specific values?

Kt is the round constant of round t;

The constant values used are chosen to be nothing up my sleeve numbers: the four round constants k are 230 times the square roots of 2, 3, 5 and 10. The first four starting values for h0 through h3 are the same with the MD5 algorithm, and the fifth (for h4) is similar.

from Nothing up my sleeve number:

In cryptography, nothing up my sleeve numbers are any numbers which, by their construction, are above suspicion of hidden properties. They are used in creating cryptographic functions such as hashes and ciphers. These algorithms often need randomized constants for mixing or initialization purposes. The cryptographer may wish to pick these values in a way that demonstrates the constants were not selected for a nefarious purpose, for example, to create a backdoor to the algorithm. These fears can be allayed by using numbers created in a way that leaves little room for adjustment. An example would be the use of initial digits from the number π as the constants. Using digits of π millions of places into its definition would not be considered as trustworthy because the algorithm designer might have selected that starting point because it created a secret weakness the designer could later exploit.

After some evidences of the Silk Road trial got out, Gwern noticed a PGP key was in here...

This is the ASCII-armored private key of the main DPR public key, the one he signed forum posts with and messaged with people. I was surprised to see it screenshotted like that, and I thought it would be hilarious if I could take the private key and announce that I was actually the real DPR by signing it with his key (since I've occasionally been accused of it).

more on the story here

I'm using cmder on windows, it's pretty and it comes with a lot of unix tools (cat, ls, bash, ssh, more, grep...) and pipes and streams and... I can use vim in the console. Not emacs, vim. I do have emacs on windows but I don't think I can do a emacs -nw to just use it from the console. So let's go back to learn vim, because I hate being slow. And here is a nice way of doing it!

you can find several pictures of a keyboard aiming at teaching you step by step how vim works. This is all I needed!

I'm digging into the code source of Sage and I see that a lot of functions are implemented with Shoup's NTL. There is also FLINT used. I was wondering what were the differences. I can see that NTL is in c++ and FLINT is in C. On wikipedia:

It is developed by William Hart of the University of Warwick and David Harvey of Harvard University to address the speed limitations of the Pari and NTL libraries.

Although in the code source of Sage I'm looking at they use FLINT by default and switch to NTL when the modulus is getting too large.

By the way, all of that is possible because Sage uses Cython, which allows it to use C in python. I really should learn that...

So the reason behind it seems to be that NTL is better for large numbers.

Silk Road's trial just closed and I ran into this old (?) journal of Ross Ulbricht that contains quite a bunch of interesting passages. I think this will turn into a movie.

03/25/2013
server was ddosed, meaning someone knew the real IP. I assumed they obtained it by becoming a guard node. So, I migrated to a new server and set up private guard nodes. There was significant downtime and someone has mentioned that they discovered the IP via a leak from lighttpd.

03/29/2013
commissioned hit on blackmailer with angels

04/04/2013
withdrawals all caught up made a sign error when fixing the bond refund bug, so several vendors had very negative accounts. switched to direct connect for bitcoin instead of over ssh portforward received visual confirmation of blackmailers execution

05/04/2013
attacker agreed to stop if I give him the first $100k of revenue and $50k per week thereafter. He stopped, but there appears to be another DoS attack still persisting

09/19 - 09/25/2013
red got in a jam and needed $500k to get out. ultimately he convinced me to give it to him, but I got his ID first and had cimon send harry, his new soldier of fortune, to vancouver to get $800k in cash to cover it. red has been mainly out of communication, but i haven't lost hope. Atlantis shut down. I was messaged by one of their team who said they shut down because of an FBI doc leaked to them detailing vulnerabilities in Tor.

09/30/2013
Had revelation about the need to eat well, get good sleep, and meditate so I can stay positive and productive.

All of this sounds so surreal. He is making a huge amount of money for sure. A million dollars doesn't seem much for him. He is constantly buying servers and he seems to be coding a lot. He also seem like a normal dude.

And here's a funny thread on who's Variety Jones

I was looking for a way to know what are the real differences between magma, sage and pari. I only worked with sage and pari (and by the way, pari was invented at my university!) but heard of magma from sage contributors.

The biggest difference between Sage and Magma is that Magma is closed source, not free, and difficult for users to extend. This means that most of Magma cannot be changed except by the core Magma developers, since Magma itself is well over two million lines of compiled C code, combined with about a half million lines of interpreted Magma code (that anybody can read and modify). In designing Sage, we carried over some of the excellent design ideas from Magma, such as the parent, element, category hierarchy.

Any mathematician who is serious about doing extensive computational work in algebraic number theory and arithmetic geometry is strongly urged to become familiar with all three systems, since they all have their pros and cons. Pari is sleek and small, Magma has much unique functionality for computations in arithmetic geometry, and Sage has a wide range of functionality in most areas of mathematics, a large developer community, and much unique new code.

I also noticed that Sage provides an interface to Shoup's NTL through ntl. functions. Good to know!

here's an entertaining piece about NSA backdoors through history: http://ethanheilman.tumblr.com/post/70646748808/a-brief-history-of-nsa-backdoors

1997 Lotus Notes: The NSA requested that Lotus weaken its cryptography so that the NSA could break documents and emails secured by Lotus notes. This Software was used by citizens, companies and governments worldwide.

I talked about this one here.

You can get the .xpi on the github repo. Just open it with Firefox and no restart is needed! (Ctrl+O in firefox)

For now it's very basic. You will see this icon next to the close button:

Yes I know I should create a custom icon :D but I was too busy coding. You will then see some basic statistics of the day. 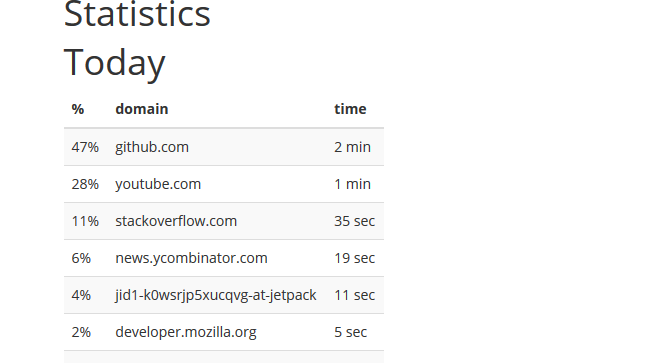 I'm now working on making this page nice with pretty graphics and more statistics (week, month, tracking of the most visited website of the week...).

So if you want to try my plugin, know that it works (so far)! And that you should pay this blog a visit because I'm planning on updating it.